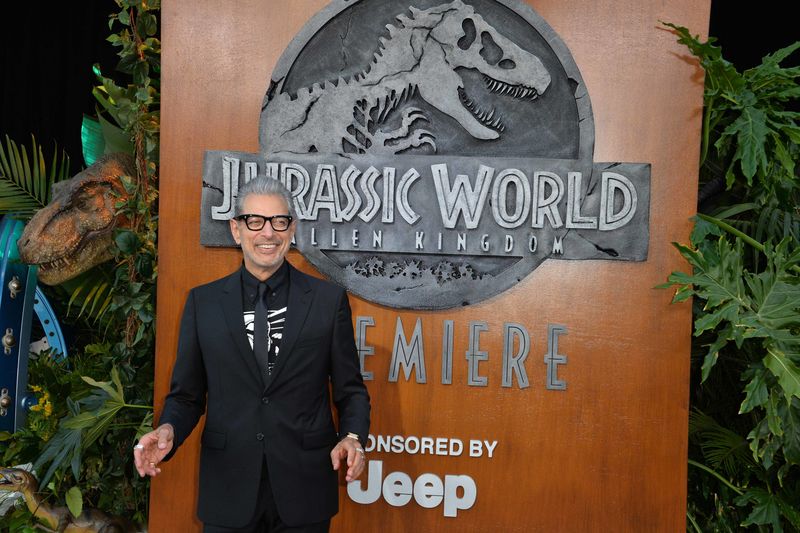 Can you recall the first time you went on the Jurassic Park set in the ’90s and interacted with a big animatronic dinosaur?
Jeff Goldblum: Oh, yeah. Stan Winston and his team were in charge of all those real puppets and animatronics, and Dennis Muren did the pioneering work on the CGI which brought things to life like we had never seen before. On the first one in 1993 I was in Hawaii, in Kauai, and I remember that first scene that we had with the triceratops. It was sick and it had made a big pile of leavings there, and funny things happened around them. And when we came upon that thing; I remember when we drove up to the location and saw that thing, it was just incredible. The puppeteers, or whatever they wanted to be called, there were six or seven of them in a bunker, hiding, so you didn't see them. One was controlling the blinking eye and one was controlling the breath and this thing felt alive, for all the world, when you came upon it. It really looked like a life-size triceratops. It was amazing.

When you were approached to join this Jurassic World movie you spoke to Colin Trevorrow and you had some ideas. What were those ideas?
We worked out that I was going to do this part and they sent me the script and I got this scene, a lovely scene, where I am talking to the governmental people, trying to put my ideas about what we should do about the dinosaurs and the island and the volcano. I talk about some other things. Then it was a month or two before I was going to shoot and I started to get little ideas about ways that I might phrase things, words that I might use, just different things I might say. I wanted to be clear about the ideas that they had suggested and what we were all talking about. So before I got too far down the road and had solidified what I was going to do, I thought I had better call the writer, Colin Trevorrow, and make sure we were on the same page. Anyway, he was very sweet. We had never met or talked before but I remember pacing around my room with my ideas and talking to him and he liked some of my ideas, I think, and we synergized, as they say. Then we got a different version of the script. I loved it. It was one of the most creative, exciting things I have done.

Were you disappointed you weren't out in Hawaii with the dinosaurs this time round? Instead, you bookend the movie…
I was very happy to do whatever I was doing, whatever you call what I did in this movie. I was very happy. Chris Pratt and Bryce are so able bodied and spectacular and I don’t know how my character could get drawn into close proximity to the dinosaurs anyway. Unless my interest in human mentality and chaos theory, of course, and the extent of human madness and misguided self-management and my interest in planetary management and species interaction meant that maybe I would go in just to be close to this kind of thing and to see what I could contribute. But, in any case in this movie I was very happy to do my little part.

Did you think that this film had real, modern day relevance, considering where we are with genetic modification, artificial intelligence, and the boundaries of science? I thought so…
I did, too. I think some of the ideas, especially some of the ideas I get to talk about, coincide with some of the interests I have in life on this planet right now, and some of the issues. Yes, the science that the movie talks about and some of the ideas, are a very beautiful endeavour. And the pure scientific approach has us investigating and following our curiosity and pinning down some facts about who we are and where we are and where we come from. This is a very beautiful thing and we should honour science and the use of the power of those facts and knowledge. It is really important, though, to consider our ethical use of science and our shared value to make this beautiful planet work for everyone, including all the species. It is a very beautiful idea and we must struggle to see that through.